Last Sunday, October 27, the White House released a photo showing president Trump and his national security team in the Situation Room of the White House.

The photo caused some discussion because people suggested that it might be staged, but here the focus will mainly be on the communications equipment. 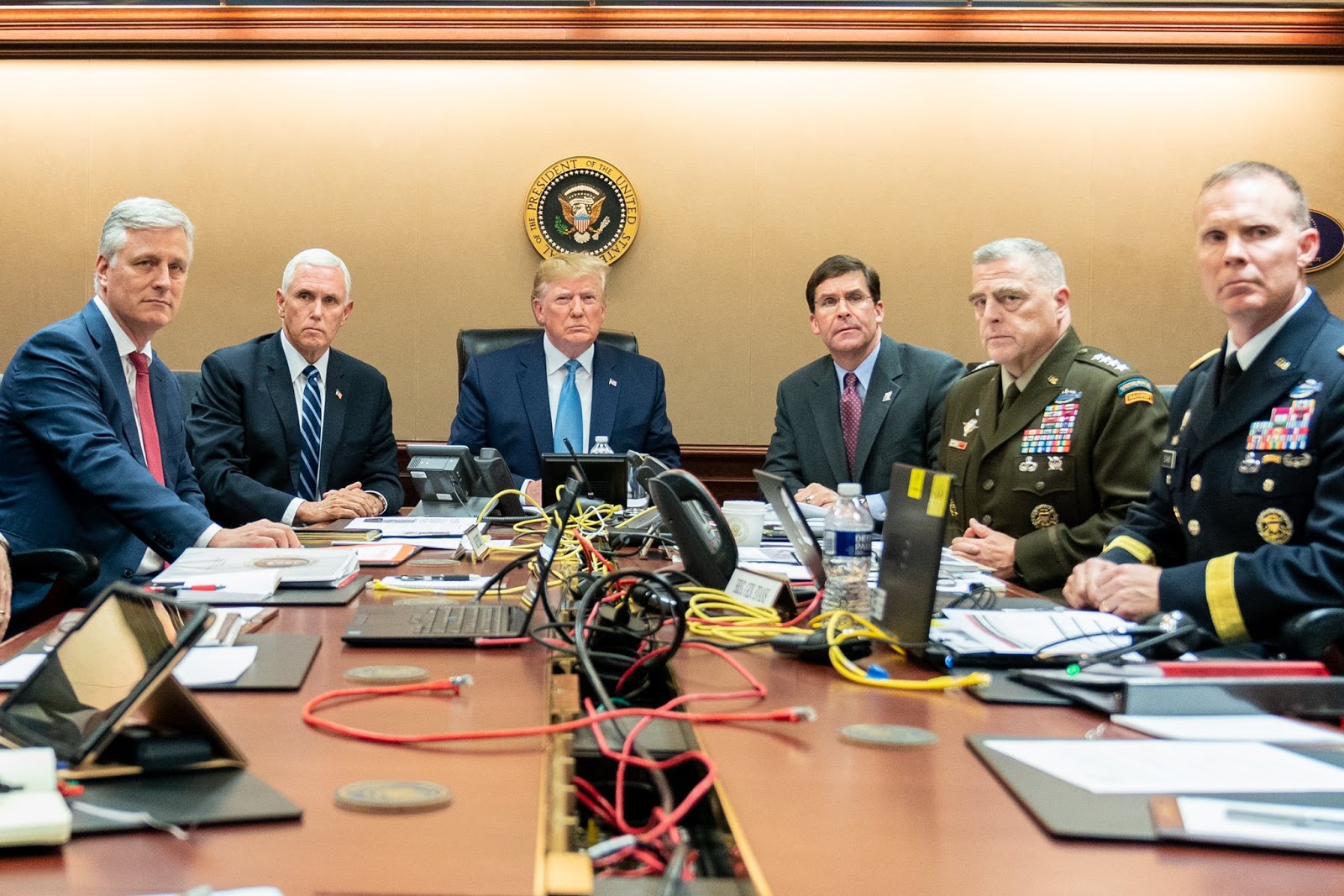 The people in this photo are, from left to right: National Security Advisor Robert O’Brien, Vice-President Mike Pence, President Donald Trump, Secretary of Defense Mark Esper, Chairman of the Joint Chiefs of Staff US Army General Mark A. Milley, and Brig. Gen. Marcus Evans, Deputy Director for Special Operations on the Joint Staff.

According to the press secretary, they were monitoring developments as US Special Operations forces closed in on the compound of ISIS leader Abu Bakr al-Baghdadi in Syria. Baghdadi eventually killed himself (and three of his children) by detonating a suicide vest. Some 14 hours after the raid, Trump announced Baghdadi's death.

In the photo released by the White House we see several different telephone sets: left of president Trump, at his right hand, is a Cisco IP phone (either the 8841, 8851 or 8861), which is part of the internal White House telephone network and can be used for all non-secure calls.

On the back of this phone is a black metal box, which is a modification by Advanced Programs, Inc. (API) in order to meet Telephone Security Group (TSG) standards, including measures to prevent the handset and the speakerphone from picking up and transmitting audio when the phone is on-hook.

> See also: Trump's "beautiful" Oval Office phones and what was changed on them 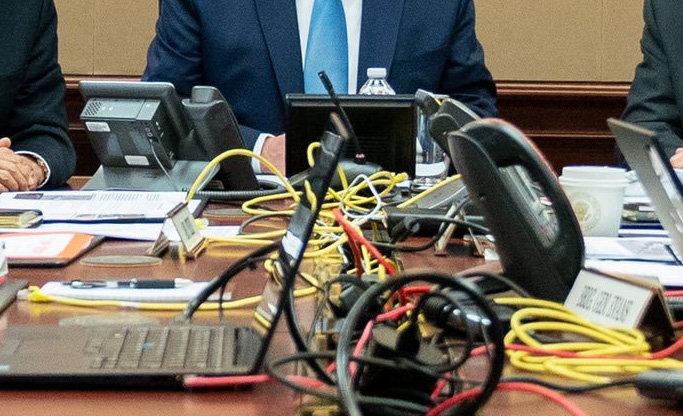 A similar Cisco IP phone can be recognized at the left side of Trump, in front of the Chairman of the Joint Chiefs of Staff. This telephone doesn't have the additional box on the back, but does have a bright yellow faceplate, which is the color code for the highest classification level: Top Secret/SCI.

Therefore, this telephone is for secure calls, through the dedicated Executive Voice over Secure IP-network, which connects the US president with all major decision makers. The phone itself has no encryption capability, as it's connected to a central network encryptor, probably from General Dynamics' TACLANE familiy.

> See also: A new secure phone for outside the White House
The secure telephone is almost hidden behind an older Cisco 7975G IP phone. This phone seems to have the standard silver faceplate, but there's a red label on the handset, which usually indicates a secure line. Maybe it was installed especially for this operation as in the White House these old Cisco phones should have been replaced by newer ones from the 8800-series

Besides the telephones, there are also some computers in the Situation Room: a tablet computer and three black laptops, one of which has two yellow labels, showing that the device may be used for classified information up to the level of Top Secret/SCI. Right in front of president Trump is a small AMX touchscreen to control the audio and video in the room.

In the middle of the table there's a mess of network cables, many of them color-coded according to the classification level of the network they may connect to: red for Secret and yellow for Top Secret/SCI networks.

Given that the meeting was about a military operation, they may have used:
- SIPRNet for military information at the Secret level
- JWICS for Top Secret/SCI military intelligence.
Both networks also have Voice-over-IP and video streaming capabilities.

Was the photo staged?

Immediately after its release there were speculations about whether the photo was staged. On twitter, former White House photographer Pete Souza initially wrote: "The raid, as reported, took place at 3:30 PM Washington time. The photo, as shown in the camera IPTC data, was taken at “17:05:24”."

The latest press reports however say the attack in Syria took place after midnight local time in Syria, which corresponds to 6:00 PM in Washington. President Trump had been out golfing and arrived back at the White House at 4:18 PM, well in time to be in the Situation Room around 5:00 PM - which would mean the photo was taken before the two-hour operation started.

The photo of Trump's Situation Room reminds of the one showing president Obama and his national security team following the operation in which Osama bin Laden was killed on May 1, 2011, a scene that is generally assumed to look more realistic: 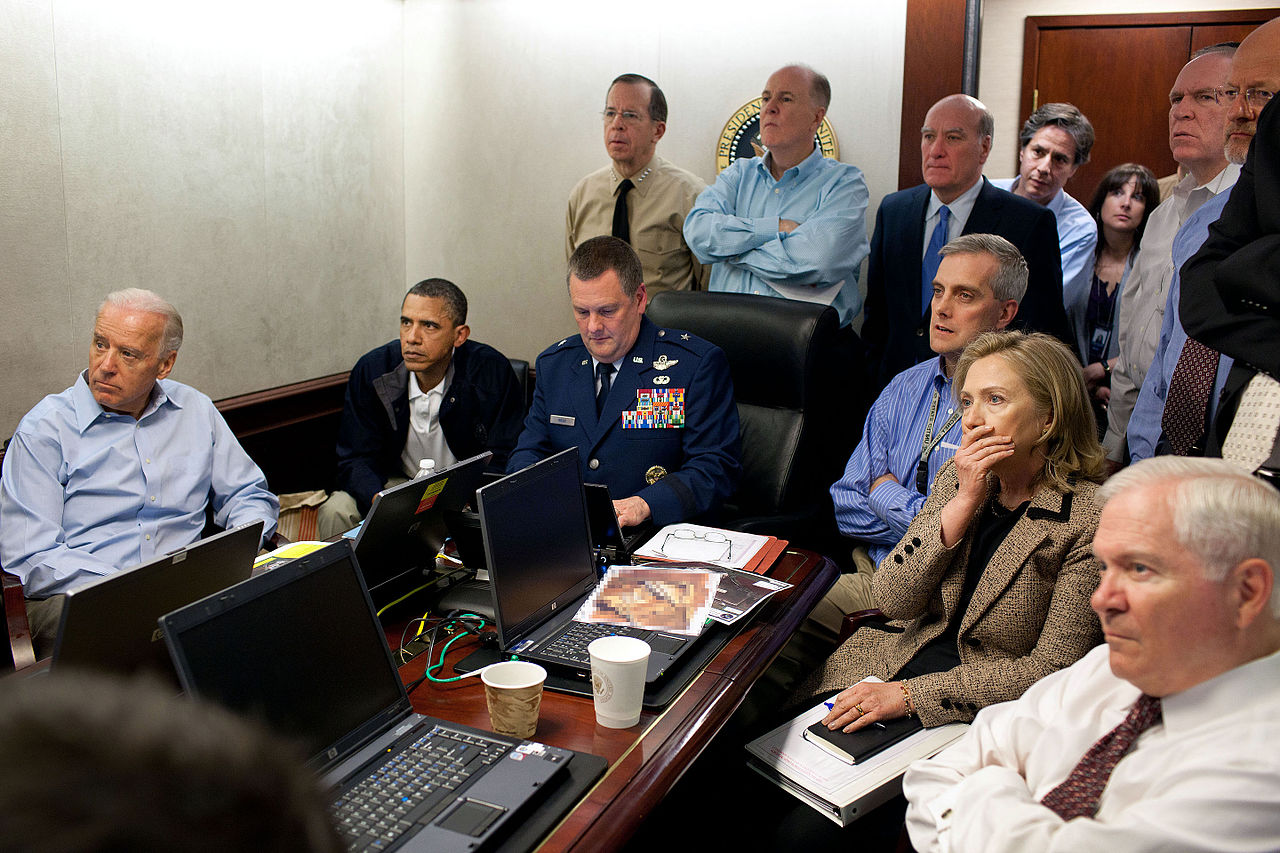 In the Obama photo most officials aren't wearing suit jackets and no one is looking at the camera. Everyone was focused on the dramatic events on the video screen of the room (which is one of the smaller meeting rooms, next to the main conference room seen in the Trump photo).

By contrast, Trump and his ministers are fully dressed up with the president himself right in the center. Everyone looks, or is supposed to look right into the camera, which means the photographer stood right in front of the main video screen as can be seen in an earlier photo of the room taken from another angle: 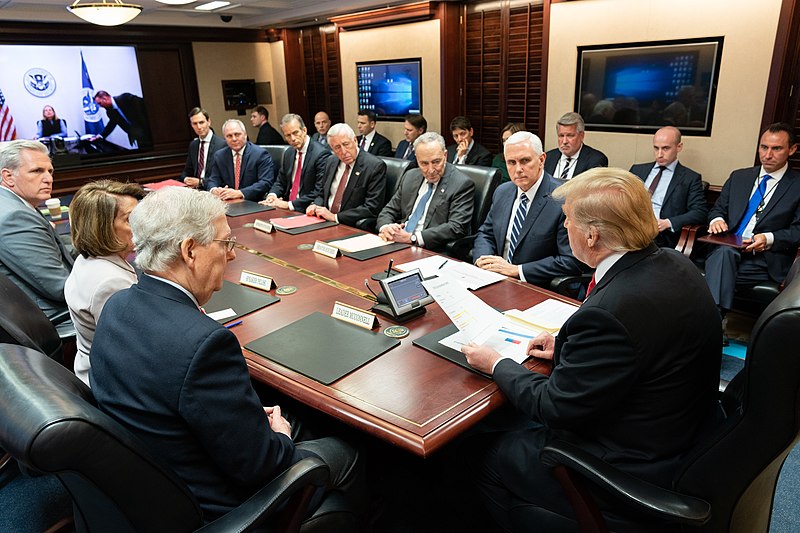 
So it seems that just before the operation against Abu Bakr al-Baghdadi would start, president Trump took the opportunity to have pictures taken showing him and his national security team in the way he likes it - which is opposite to Obama's much more informal style.