A unique note from the BND about European SIGINT alliances

On July 1, the German newspaper Frankfurter Rundschau (FR) also published an article about the Maximator alliance, which includes a handwritten note by an employee of the German foreign intelligence service BND.

This note appeared to be rather spectacular, as it provides some details about two different European SIGINT alliances, which are among the most sensitive en secretive aspects of intelligence. 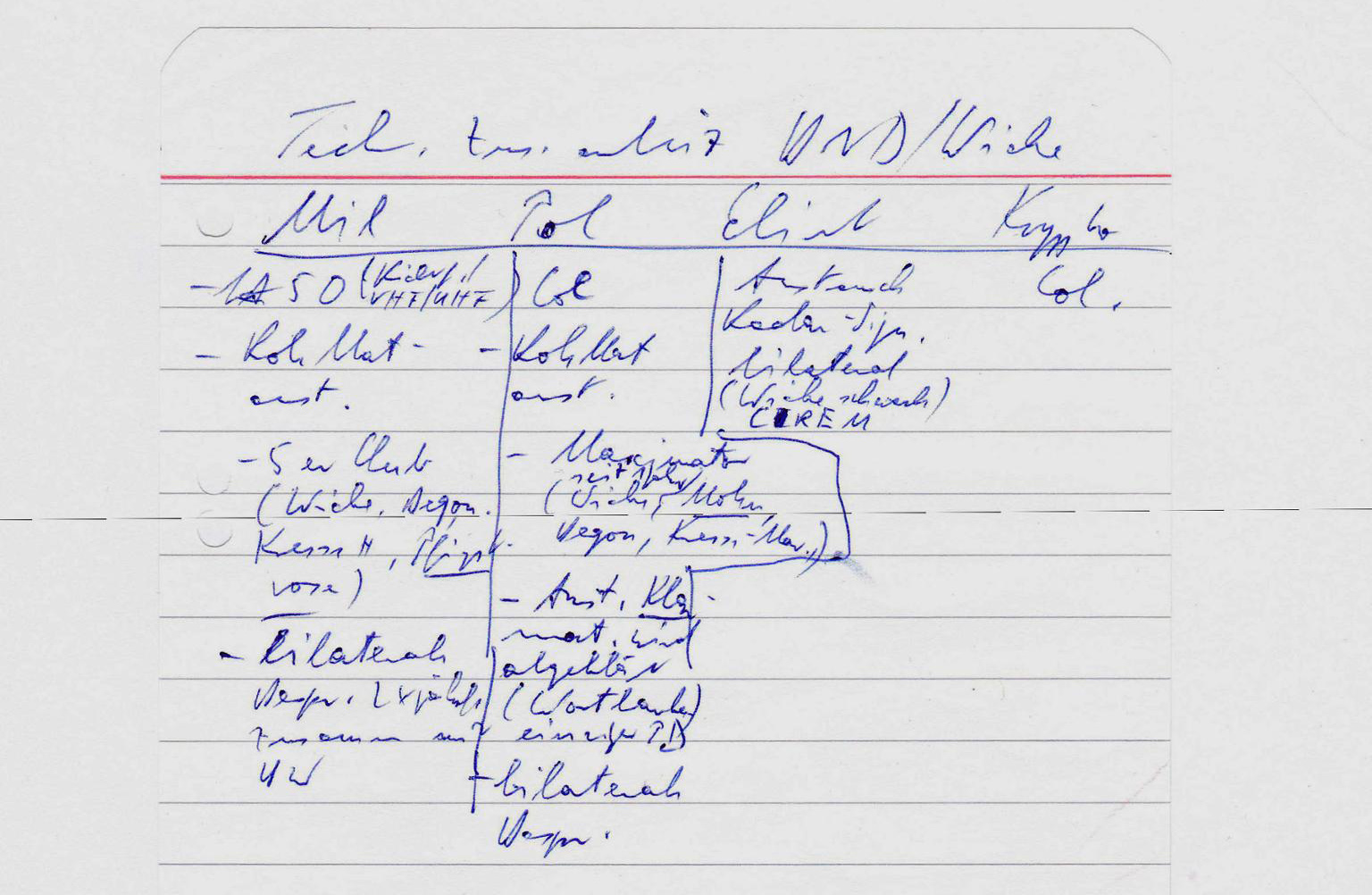 According to the Frankfurter Rundschau, the note was written in 1986 by a manager from the BND who was responsible for the Maximator alliance.

Unfortunately, his handwriting is very difficult to read, but with some puzzling and guessing it was possible to clarify most of the text (please leave a comment if you think you can fill in some of the remaining gaps).

Below is the original text of the note in German on the left side (with the abbreviations written in full) and a translation in English on the right side:

The title of the note is hardly readable, but the Frankfurter Rundschau says it reads "Technische Zusammenarbeit" or technical cooperation between the German Bundesnachrichtendienst (BND) and the French foreign intelligence service Direction Générale de la Sécurité Extérieure (DGSE).

Then there are four columns for the subsets of Signals Intelligence (SIGINT) involved in this cooperation: first Communications Intelligence (COMINT) related to military issues as well as to political issues, then Electronic Intelligence (ELINT), and finally Crypto or cryptography which is needed to decrypt communications that are encrypted.

When it comes to the cryptologic cooperation between BND and DGSE, the note only has the mysterious abbreviation "Col.", which reminds of terms like "collection" and "collaboration" but these doesn't seem to fit, given that the rest of the text is in German.

According to the article by professor Jacobs, the members of the Maximator alliance (see below) exchanged algorithms used in various (deliberately weakened) encryption devices used by target countries. It was then up to the individual partners to find out how to exploit these weaknesses.

The note also doesn't provide much information about the cooperation between France and Germany in the field of Electronic Intelligence (ELINT), which is about the collection and analysis of signals that do not contain human communications.

ELINT aims at the electronic parts of the defense network of the enemy, like radars, surface-to-air missile systems and aircraft systems, so ships, aircraft and missiles can be detected by their radar and other electromagnetic radiation.

According to the note, BND and DGSE exchanged data about radar transmissions on a bilateral basis, but it also seems to say that the French capabilities were rather weak.

There are also the letters CREM, likely an abbreviation, but it's not clear what it stands for (in French it could be something like Centre de Renseignement ElectroMagnétique or Center for Signals Intelligence).

The second column of the note is about Communications Intelligence about political issues. Here we see the mysterious abbreviation "Col." again, which is also in the Crypto column.

The note then says that on this topic, BND and DGSE exchanged raw communication intercepts which were also shared multilaterally within the Maximator alliance. According to Jacobs, the focus of this group was on intercepting and decrypting diplomatic communications, both from HF radio transmissions and SHF satellite links.


> More information: Maximator and other European SIGINT alliances
The Maximator alliance has its own cover names for each of its partners, but in the BND note the members are listed by the regular cover names that the BND used for its foreign partners, which are names of flowers and plants:

From professor Jacobs' article we now that France requested to join the Maximator alliance in 1983. This was supported especially by Germany and as a result France was invited in 1984 and joined in 1985. So when the BND note says "since 1 year", it means the document was written somewhere in 1986.

For the Netherlands it was the Technisch Informatieverwerkings Centrum (TIVC) that participated in the Maximator group. The TIVC was the cryptanalysis centre of the Dutch Navy, which is indicated by the abbreviation "Mar" for Marine behind the cover name for the Netherlands. 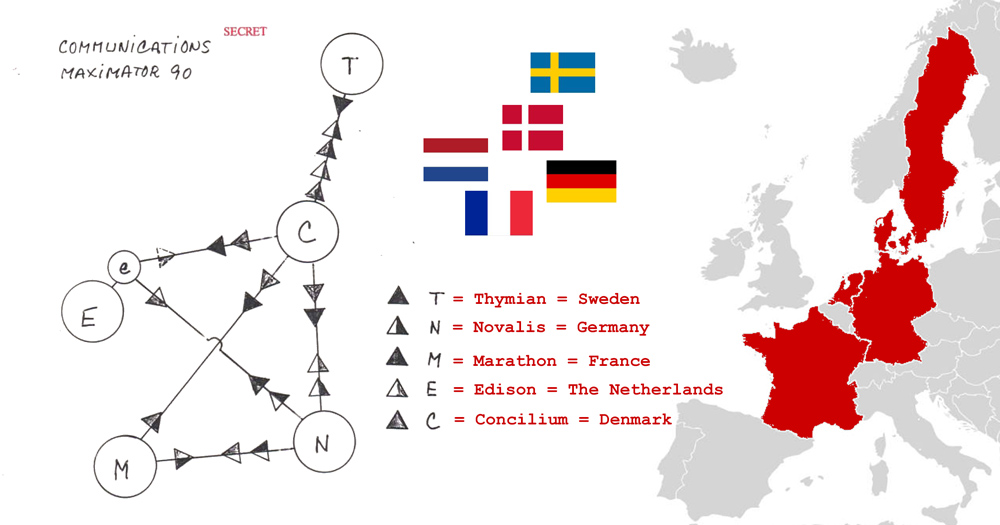 After listing the members of the Maximator alliance, the BND note probably says something about what exactly was exchanged, but this is not fully readable. One interesting term is Wortbanken, which may be similar to the "dictionaries" containing the selectors used to filter content of interest out of the intercepted data streams, a method well known from the Five Eyes agencies.

For the coordination of the exchange of political intelligence there were bilateral talks, but it's not clear whether that's just between BND and DGSE or that it applies to the Maximator alliance. The latter would contradict Jacobs' article, which says that signals interception issues were discussed in multilateral meetings attended by all members.

Finally, the first column of the note is about Communications Intelligence related to military issues. It starts with some letters or numbers (maybe 50?), followed by the remark that the cooperation is apparently about intercepting microwave (Richtfunk) and possibly other VHF and UHF radio transmissions.

Since the 1950s, microwave radio relay links were widely used for long-range point-to-point communications, both for civilian and military purposes. During the Cold War, the United States had the unique capability to intercept Soviet microwave traffic using satellites such as the Rhyolite/Aquacade, which could pick up the beam of a microwave link that passes the receiving antenna and radiates towards the horizon and then into space: 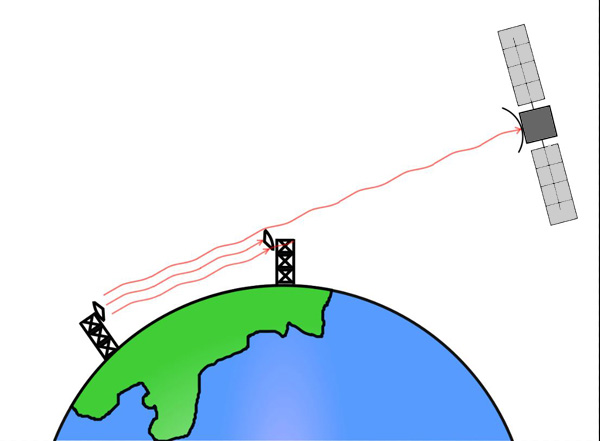 Because Germany and France, nor other European countries had such satellites to intercept microwave signals, collaboration and sharing their own intercepts could have provided an alternative that made them less dependent on American intelligence from this particular source.

Just like political intelligence was shared within the Maximator group, this military intelligence was also exchanged multilaterally, but in a different group which was called "5er Club" or "Club of Five". The note also lists the members of this group, again using the regular BND cover names: 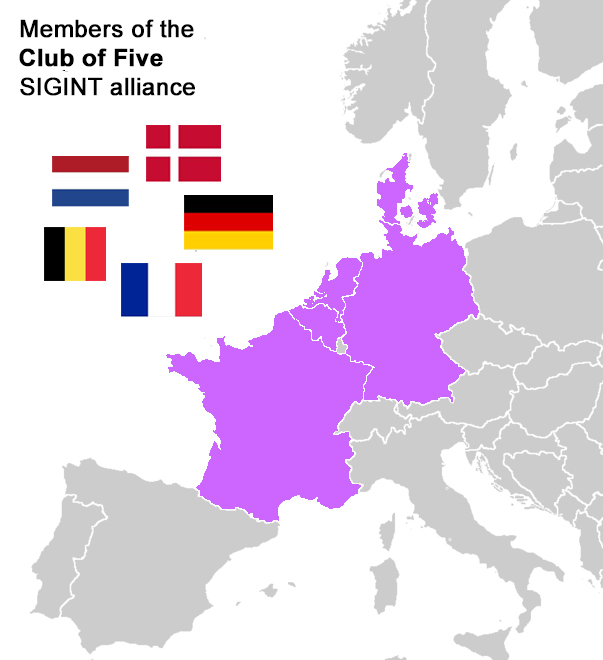 Note that the membership of the Club of Five is slightly different from the Maximator alliance: it has Belgium instead of Sweden as a member. For the Netherlands, it was the 898th signal battalion of the Dutch army that participated in the Club of Five.

Through several listening stations along its borders as well as mobile SIGINT units, the BND itself was able to intercept microwave and radio transmissions from inside the German Democratic Republic (DDR). The signals intelligence units of the French military have similar capabilities, probably also aboard dedicated spy ships.

This Club of Five was also mentioned in professor Jacobs' piece, who referred to a book by Richard Aldrich which says that since the early 1980's there was a "mini-UKUSA-alliance called "The Ring of Five", consisting of the sigint agencies of Germany, the Netherlands, France, Belgium and Denmark". In a note, Jacobs also suggests that this group may also "have been called Fünfgruppe".

According to the BND note, the exchange of military intelligence was also discussed during bilateral meetings, in this case twice a year and together with "UW", but it is unknown what that stands for.

The scan of the note

The Frankfurter Rundschau did not only publish the written part of the note about the cooperation between BND and DGSE, but the whole sheet of notebook paper as it was scanned, including another sheet of paper that was used as a background: 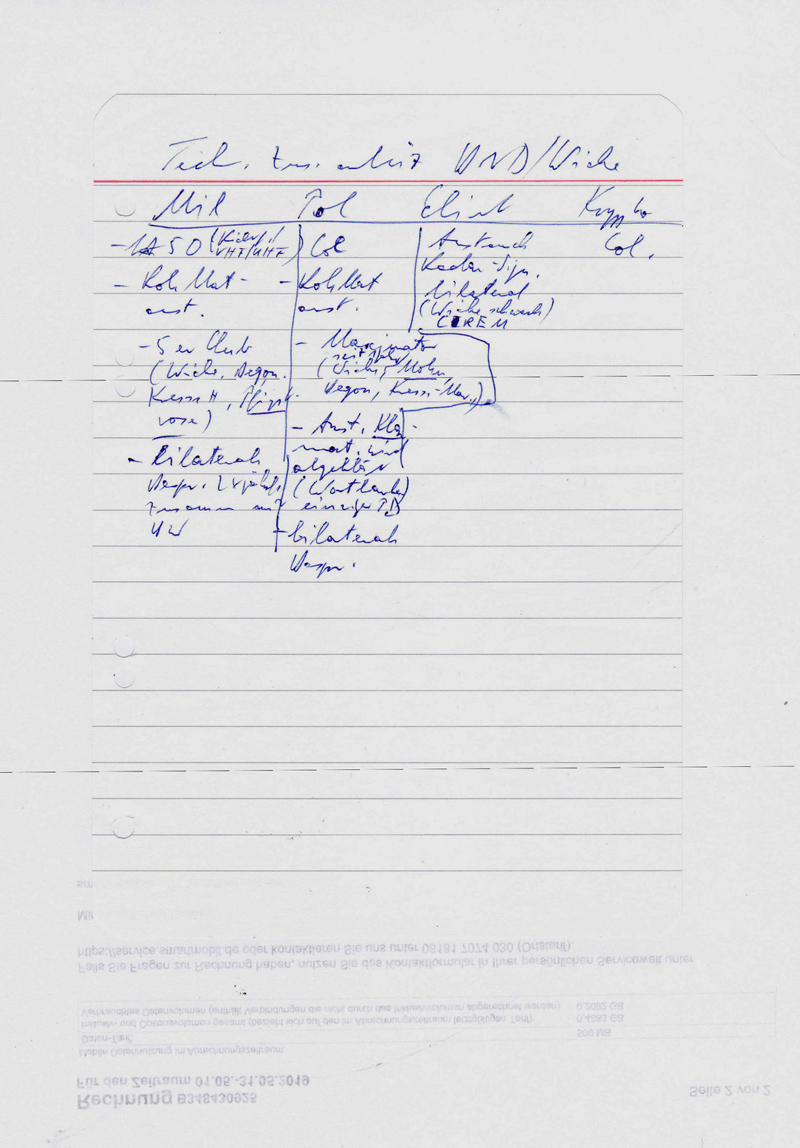 A close look at the bottom of the scan reveals some text that bleeds through from the back side of the larger sheet of paper. Rotating, mirroring and enhancing the image shows that it's part of a bill from the German cell phone provider Smartmobil for mobile data usage for the month of May 2019:

This shows that the BND note wasn't scanned before May 2019 and maybe it could even provide a lead to the person who leaked the note to the press. Therefore, it's quite sloppy that Frankfurter Rundschau didn't cut off this part of the scanned document to make sure that there's no trace to the source.

Thanks to Le cueilleur and Zone d'Intérêt for providing some useful information for this blog post.