Brazil’s failure to contain the Covid-19 pandemic and promptly purchase vaccines has largely been attributed to ideology — the economic libertarianism and anti-science stances of far-right President Jair Bolsonaro. As a steady stream of revelations of multimillion-dollar kickback schemes in vaccine purchases emerges, however, another possible motive is emerging: maximizing profit.

“There is a direct relationship between denialism, corruption, and the way the pandemic has become the country’s greatest health tragedy and the greatest story of corruption,” Rep. Paulo Pimenta, an opposition politician, told The Intercept.

Two separate but intertwined cases with strong evidence of fraud have become the focus of a Senate investigation into the government’s mishandling of the pandemic. The cases implicate members of Bolsonaro’s administration, his key allies in Congress, and senior members of the military appointed to top roles in the Health Ministry. In both instances, Health Ministry officials attempted to buy vaccines through intermediaries rather than directly from producers, which are less likely to partake in brazenly crooked deals.

Bolsonaro reportedly failed to intervene when alerted to irregularities in the government’s negotiations to acquire 20 million doses of the Covaxin vaccine, produced by India’s Bharat Biotech, at above-market rates. In a sworn Senate testimony, the whistleblower claimed that the president said, “It’s another scam by this Ricardo Barros,” referring to an ally who is a leader in the lower house of Congress and a former health minister and who serves as a prominent member of a powerful and notoriously corrupt centrist bloc. Bolsonaro, who rose to prominence on an anti-corruption platform, has not refuted the accusations. What’s more, the president’s son, Sen. Flavio Bolsonaro, also has close ties to the owner of the intermediary firm at the center of the scandal, Precisa Medicamentos.

In the second case, the Health Ministry’s former head of logistics, Roberto Dias, allegedly requested a $1 kickback on each dose from a supplier, U.S.-based Davati Medical Supply, which claimed that it could provide 400 million AstraZeneca shots. Davati, it turned out, was not actually a representative of AstraZeneca and had no way of delivering on the deal, yet somehow was able to negotiate with top officials.

Meanwhile, revelations continue to trickle out of the Senate commission, which convened in late April and will resume hearings on August 3, after a two-week recess.

“Every day we are discovering a new element or fact,” said Sen. Randolfe Rodrigues, vice president of the commission. “We are also discovering other fraudulent contracts with suspected corruption.”

As a presidential candidate in 2018, Bolsonaro ran against the large, powerful bloc of political parties representing the country’s oligarchs, known widely as the “Centrão.” He slammed them as corrupt and “the worst of Brazil.” At Bolsonaro’s campaign launch, a close adviser told the crowd that “the Centrão is the embodiment of impunity.”

Yet as evidence of impropriety mounts and public opinion tilts sharply against Bolsonaro, the president is deepening his alliance with the Centrão, handing over more power in an apparent strategy to secure some impunity of his own.

On Tuesday, Sen. Ciro Nogueira accepted Bolsonaro’s offer to become his chief of staff, a key Cabinet-level position reserved for trusted allies. Nogueira is a Centrão leader and has been directly implicated in coronavirus-related corruption; he is also under investigation in five other criminal cases. He was the president’s main defender in the Senate commission, where he will be replaced by Flavio Bolsonaro.

By handing over the keys to the presidential palace, Bolsonaro will appease the speaker of the lower House of Congress, Arthur Lira, who is from Nogueira’s party and is the only person in Brazil who can initiate, or block, impeachment proceedings over the tragic mishandling of the pandemic. 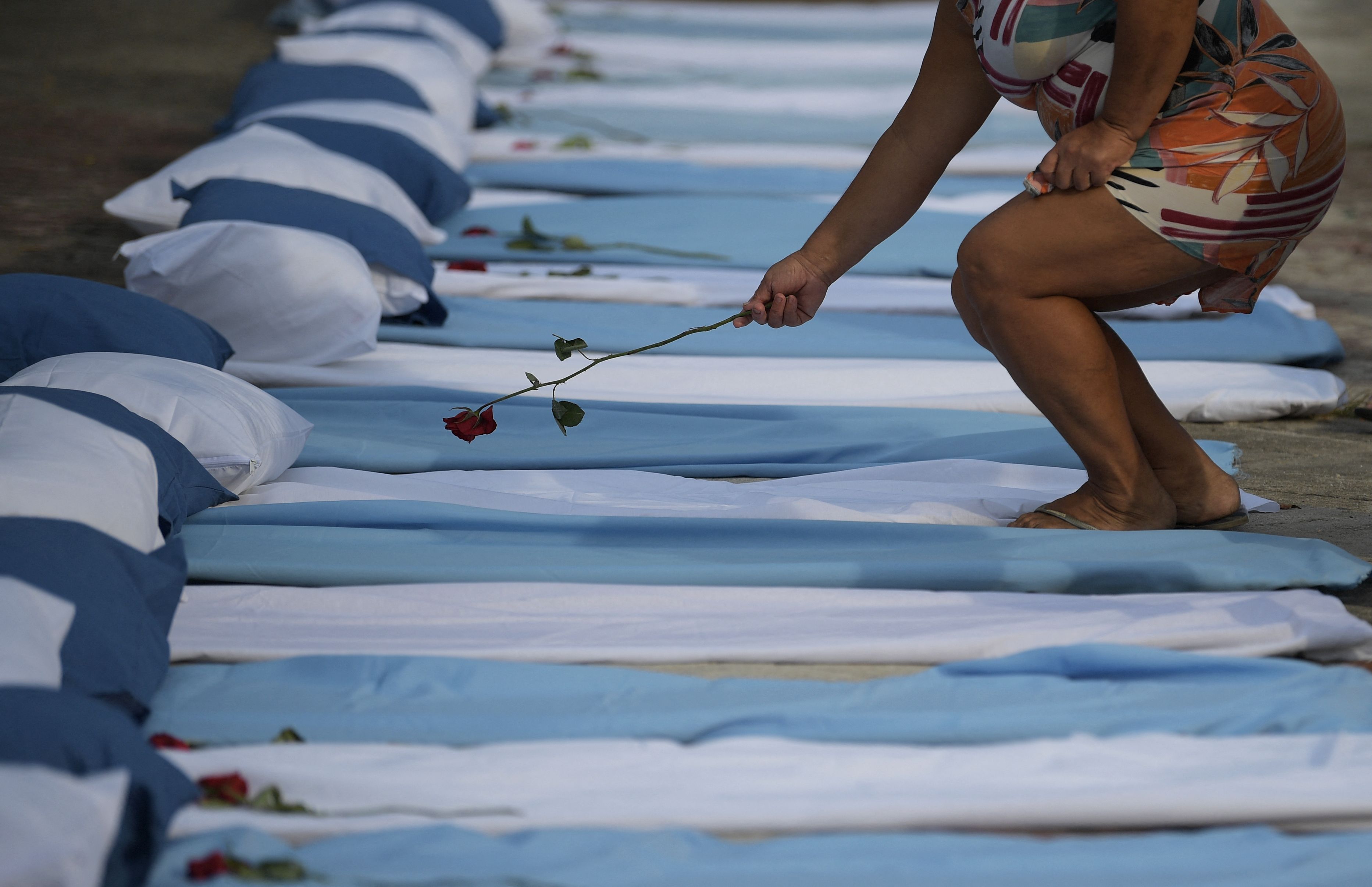 A woman lays a rose on top of a mattress symbolizing Covid-19 victims during a protest by the Rio de Paz human rights activist group outside a hospital in Rio de Janeiro, Brazil, on March 24, 2021.

More than 550,000 Brazilians have died of Covid-19, the second-highest death toll in the world. Since last March, public health experts and political observers around the world gnashed their teeth as Bolsonaro, time and again, downplayed the seriousness of the disease and encouraged Brazilians to live their lives as usual, without masks. A comprehensive study by researchers at the University of São Paulo concluded that the president “intentionally” and systematically acted to spread the virus.

Tatiana Roque, coordinator of the Science and Culture Forum at the Federal University of Rio de Janeiro, told The Intercept that the Bolsonaro administration pursued an “anti-scientific, denialist, eugenicist, and individualistic” response to the pandemic due to deeply held ideological commitments. Every tool to effectively combat the pandemic requires “greater regulation and a greater presence of the state,” she said. These “collective measures,” according to Roque, “go against the founding ideology of this extreme right, which is its libertarianism.”

Pimenta, the member of Congress from former President Luiz Inácio Lula da Silva’s opposition Workers’ Party, said that corruption is at the heart of the pandemic response and that Bolsonaro is responsible. “Anyone who knows Bolsonaro, the Bolsonaro family, knows that no corruption scheme occurs within the government without the direct participation of the family,” Pimenta said. “He’s the head of the criminal scheme, him and his sons.”

According to Pimenta, the intentional spread of the virus was part of a strategy to facilitate bribes on contracts for vaccines and emergency medical supplies.

“It’s perverse, because you need the country to have many deaths to justify to the public opinion that you’re going to pay more than the market price, in theory, to prevent those deaths from continuing to occur, even though it was you who caused the deaths. It’s Kafkaesque,” said Pimenta. “The pandemic was a window of opportunity for them because the pandemic ended the need for bidding. What’s better for a guy who deals in corruption than being able to buy everything as an emergency purchase without bidding?”

Sen. Humberto Costa, also of the Workers’ Party and a member of the Senate commission, told The Intercept that ideology and the desire to not close down the economy motivated the pandemic response; the corruption was incidental. The administration “knew that there was no way to continue stalling the purchase of vaccines, but they saw that the amount of money being spent was very large, and then they went after some possibilities that could result in bribes,” said Costa.

“The pandemic was a window of opportunity for them because the pandemic ended the need for bidding.”

Rodrigues, vice president of the Senate commission, said the inquiry has implicated “the crème de la crème of Bolsonaro’s base” in corruption cases, including many people “with relationships with Sen. Flavio Bolsonaro.”

The investigation is also looking at more than $159 million in suspicious deals between the logistics firm VTCLOG and the Health Ministry beginning in 2016. The contracts began prior to the pandemic and the Bolsonaro administration but are still active and involve his key allies, including Nogueira, Lira, Flavio Bolsonaro, and Barros.

Flavio, who was charged last year over a suspected embezzlement scheme involving mafia figures, rankled even close supporters in March when he purchased a luxurious mansion in Brasíia worth over $1 million, a home that would be unattainable based on his official income.

Rodrigues said he expects to uncover more corruption before the inquiry is finished and that the investigation has already had a substantial impact on coronavirus policy. “The investigation changed Brazil’s agenda,” he said. “The country’s agenda is no longer dictated by Jair Bolsonaro’s nonsense.” 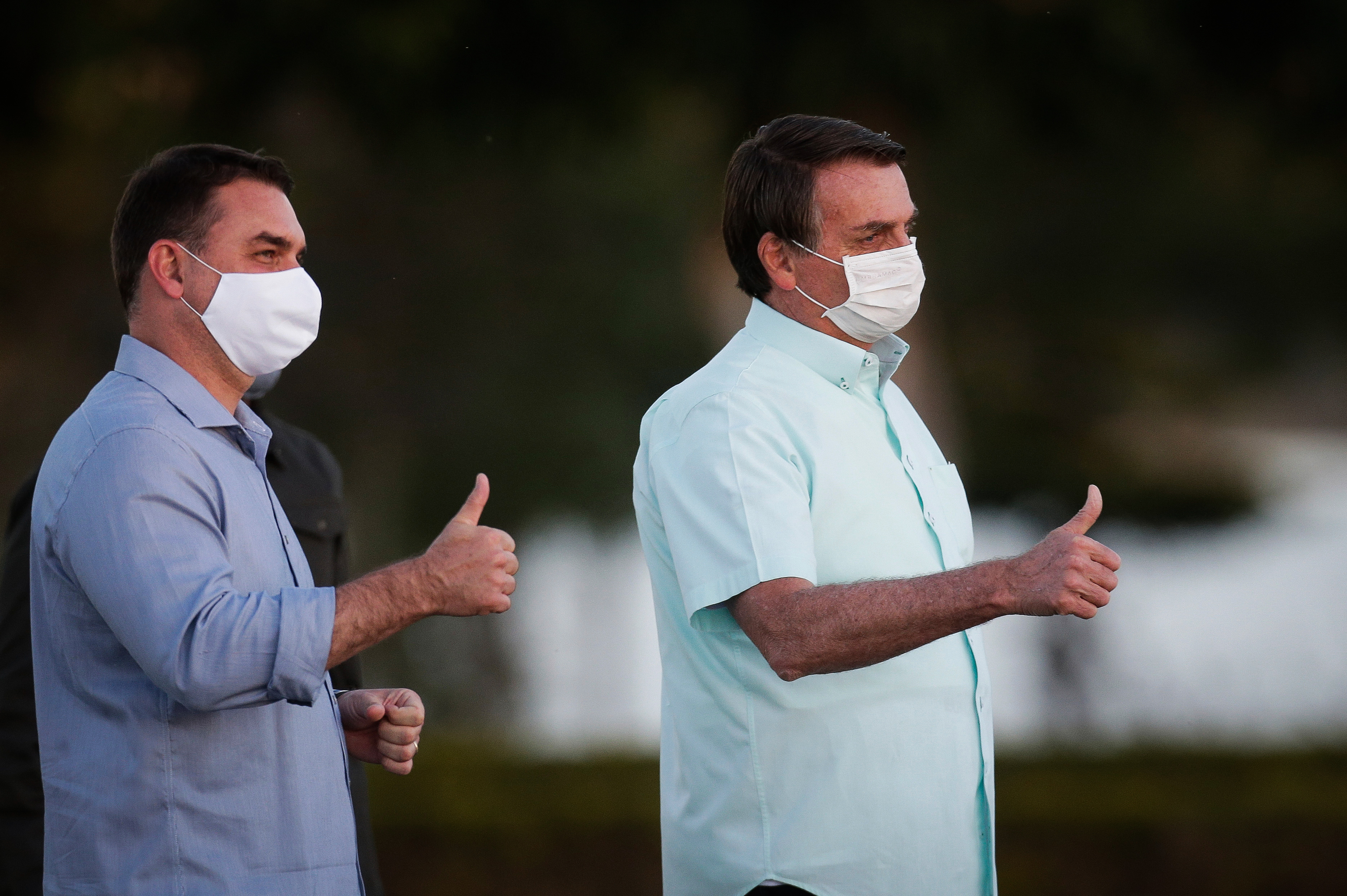 Brazilian President Jair Bolsonaro, right, and Flavio Bolsonaro, left, give a thumbs-up during the lowering of the national flag on the lawn of the Palacio da Alvorada, in Brasília, Brazil, on July 21, 2020.

The result of the government’s failure to combat the pandemic is a story of shortages and despair. One in 3 Brazilian state capitals have suspended first-dose vaccinations due to supply shortages. With 18 percent of its population fully vaccinated, Brazil lags behind regional neighbors such as Uruguay and Chile — which have some of the highest rates in the world — as well as the Dominican Republic, Cuba, and Colombia. In Rio de Janeiro, for example, eligibility only extends to those age 34 and older, in addition to adults of any age with comorbidities. New infection rates remain high but are down from near-record numbers in June.

A recent poll suggested that only 5 percent of Brazilians do not intend to get vaccinated once they are eligible, despite a yearlong deluge of anti-vaccine messaging from Bolsonaro and his allies.

The Bolsonaro administration turned down, or simply ignored, at least 14 offers from vaccine manufacturers Pfizer, COVAX Facility, and the Butantan Institute, including offers with deep discounts — decisions that significantly slowed down Brazilian vaccination efforts.

Brazil has administered over 136 million vaccine doses so far, relying primarily on the U.K.’s AstraZeneca and China’s CoronaVac, both produced in partnership with Brazilian labs. Smaller quantities of the Pfizer and Janssen shots are also being administered. Russia canceled the first shipment of its Sputnik V vaccine, scheduled to arrive on Wednesday, after Health Minister Marcelo Queiroga said that there was “no need.”

It now seems unlikely that Brazilians will be able to get vaccinated with Covaxin either. The original contract was suspended last month, and on Tuesday, the Brazilian health regulator canceled clinical trials of the drug. Days earlier, Bharat Biotech terminated its relationship with Precisa after it determined that the company had provided the Brazilian government with fraudulent documents in the manufacturer’s name.

Meanwhile, the human cost of the pandemic continues to pile up. As of April, Covid-19 created over 130,000 orphans in Brazil. And with the economy lagging, 9 million more Brazilians joined the ranks of the malnourished and hungry during the pandemic.